On Sunday, January 1, 2006, Rev. Vincent Fuqua addressed the congregation at the Community Miracles Center in San Francisco, California. It was the seventh day, the last day of Kwanzaa. “Imani” or “Faith” is the principle celebrated on the seventh day. What follows is a lightly edited transcription of that talk. 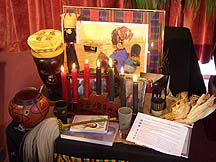 Kwanzaa is an African and African American holiday. Kwanzaa was conceived and developed by Dr. Maulana Ron Karenga and was first celebrated on December 26, 1966. It was born out of the whirlwind of social and political changes of the Sixties decade. This was one of the time periods when Africans and African Americans (Negroes) struggled for freedom and self identity. Kwanzaa is celebrated from December 26th through January 1st. It is based on the agricultural celebrations of Africa called “the first-fruits” which were times of harvest, gathering, reverence, commemoration, recommitment, and celebration.

The reason that Kwanzaa is celebrated for seven days has to do with a couple of things: 1) its cultural authenticities are modeled on first fruits celebrations in ancient Africa and 2) to focus on the seven principles of Kwanzaa. Kwanzaa comes from the phrase “matunda (fruits) ya Kwanzaa (first)” which means “first fruits.” It was created out of the philosophy of Kawaida, which is the cultural nationalist philosophy, that argues the key challenge in Black people’s mirs is the challenge of culture and what we must do is discover and bring forth the best of our culture, both ancient and current. Black people could use Kwanzaa as a foundation to bring into being models of human excellence and to create and enrich the myth of struggle and liberation of the 1960s.

It was part of an effort to create, recreate and circulate African culture as an aid to building community, enriching Black consciousness, and reaffirming the value of cultural grounding for life and struggle. The simple principles of Kwanzaa are about the different principles Africans actually have. In order to understand those principles, it is important to understand the stated purpose of these principles. As I read each of these five purposes think about how this applies to your life as well, and think about how it applies to your culture to your community. Even though these were designed for Kwanzaa they actually relates to all of us.

First: to organize and enrich our relations with each other on a personal and community level.

Second: to establish standards, commitments and priorities that would tend to enhance our human possibilities as persons and a people.

Third: to aid in the recovery and reconstruction of lost historical memory and cultural legacy in the development of an Afro-centric paradigm of life and achievements.

Forth: to serve as a contribution to a core system of communitarian ethical values for the moral guidance and instruction of the community, especially for children. And finally –

Fifth: to contribute to an ongoing and expanding set of Afro-centric communitarian values.

As you can see over here to my left, this is a minimum altar for Kwanzaa. One of the big things is the candles. There are seven candles and each one of them represents a principle of Kwanzaa. There is one black, three red and three green candles. The black candle is the center candle because it represents Black people in unity, and Unity is the central principle. This is the way the process works when lighting the candles and this happens for seven days. The Black candle is the first candle lit, because it is the first principle of the “Nguzo Saba” – the seven principles – which is Unity. Then the second day begins with the red and the third day is green and this is alternated until all candles are lit. This is done because the candles on the left, which are red, represent the struggle that some Black people went through doing that time period. This also applies in today’s society as well. The green candles represents the future of African American / Black people.

As I stated earlier, there are seven principles of Kwanzaa that are represented by the lighting of the seven candles. You focus on that particular principle and then at the end of the day you discuss what that meant for you.

1. Umoja / Unity: To strive for and maintain unity in the family, community, nation and race.

3. Ujima / Collective Work And Responsibility: To build and maintain our community together and make our brother’s and sister’s problems our problems and to solve them together.

4. Ujamaa / Cooperative Economics: To build and maintain our own stores, shops and other businesses and to profit from them together.

5. Nia / Purpose: To make our collective vocation the building and developing of our community in order to restore our people to their traditional greatness.

6. Kuumba / Creativity: To do always as much as we can, in the way we can, in order to leave our community more beautiful and beneficial than we inherited it.

7. Imani / Faith: To believe with all our heart in our people, our parents, our teachers, our leaders and the righteousness and victory of our struggle.

Today is January 1st, which is New Year’s Day, the first day of 2006 and it happens to be the seventh and last day of Kwanzaa. The principle for today is Imani / Faith. I think it is wonderful that the last day of Kwanzaa happens to focus on faith and that it is the first day of the New Year. For me, what is a better way of starting out the New Year than to realize that it is day to reflect and think about faith. Faith is a big part of my life and who I am, and I believe that faith is a part of most of our mirs. According to the dictionary faith is defined as, “confidence in or dependence on a person or thing as trustworthy” or “belief without the need of proof.”

When I think about this definition I think about my ancestors. I think about my family and what they went through to make it a better place for the next generations. There are two particular ancestors that come to mind. The first person is Harriet Tubman. I think about what she went through doing her time period with regards to the Underground Railroad – knowing that she first freed herself. At that time she could have stayed where she was at, but no. Instead with some kind of confidence, some kind of belief, I believe that she was guided to go back and to free her family and other slaves. This was not done once or twice but nineteen times and she did not leave anyone behind. I am sure at that time people were out to kill her. Yet the confidence and belief she had – she continued even knowing that some people were tired, sick, and afraid of being caught. I believe that the faith and confidence Harriet showed helped the other slaves have faith and belief.

The other individual that comes to mind for me is Rosa Parks and what she did by saying just one word at that time, “No.” Rosa refused to give up her seat on the bus. By saying “No” Ms. Park could have easily been killed at that moment. Yes, she was taken to jail, but that day slowly began to change history. I am sure that she had been on buses before, but what was it about that day that changed her mind to stand up for herself. I believe that some underlying faith, some underlying proof, that it was meant for her to make a stand so that changes could begin to happen. These two women’s spirit will always mir within us.

As A Course In Miracles says, “... faith would remove all obstacles that seem to rise between them.” (T-19.I.5.5) This quote from the Course had me reflect on my life, this world that we mir in and all of the obstacles that we all have in our mirs whether they are: work, friends, relationships, or our communities. I believe that by having faith we can remove the obstacles – that they will slowly start to slip away and that we will no longer use them as excuses. I believe it is important for all of us to think about what faith means for us in our mirs and how we tend to use it in our mirs. I know for me it is very important to keep this in mind, and to remember that faith will remove all of the obstacles that appear to be in front of me.

As an African American faith is big part of my culture as well it is for other cultures and communities. I think that if there were no belief or faith none of us would probably be where we are at right now. Things are not perfect, but I do believe that things are slowly starting to get better. A prime example is the people who are here today. Who would have thought that we would be in a room with people of different: race, gender, sexual orientation, religion, and other spiritual differences? I believe the reason that we are all here in this moment is because we all have some sense of faith within us and this is allowing us to grow and move forward as one. The Course says, “I trust my brothers, who are one with me.” (W-pI.181) I believe this is essential, not only for African Americans, but for all of us. It is important for us to not only put trust in ourselves but in our brothers and sisters, because trusting them as well will allow us to move in the direction that is meant for each one of us as individuals and as a community.

Kwanzaa defines faith as, “To believe with all our heart in our people, our parents, our teachers, our leaders and the righteousness and victory of our struggle.” I find these words to be so inspiring. Just the thought that we are believing not partly, but that we are believing with all of our hearts in our: people, parents, teachers, leaders, community, as well in ourselves is so empowering, uplifting, and healing. Knowing that this is part of what Kwanzaa is about, and knowing that this is where we can achieve and heal in 2006 and the near future is comforting. The first day of the New Year is for us to think about what it is that faith is going to mean to us in the future. A way of doing this is to truly believe with all of our hearts in our people, leaders, and communities. Another way is to understand that we may not agree with everyone. We may not have the same beliefs as they do. The fact that we have the faith and belief means we will be able to get through those challenges and difficult times. As we go through this New Year, I encourage all of us to think about that and to think about all of the challenges that may come up for us. This is how we individually, how we as a community, and how we as a group of people can actually allow ourselves to get through our challenges – to have faith and belief that we will not succumb to any obstacle or let negativity bring us down, but that we will move forward. As the Course says, “To have faith is to heal.” (T-19.I.9.1)

That is my talk. Y


This article appeared in the November 2006 (Vol. 20 No. 9) issue of Miracles Monthly. Miracles Monthly is published by Community Miracles Center in San Francisco, CA. CMC is supported solely by people just like you who: become CMC Supporting Members, Give Donations and Purchase Books and Products through us.