First Thoughts About ACIM Original Edition -or How Do You Like 'dem Apples?

At the beginning of this year, 2007, my long standing A Course In Miracles Text reading class switched from the standard Foundation for Inner Peace (FIP) edition to the new but actually older A Course In Miracles Original Edition. My class reads about 12 pages a week, aloud, during the class and discusses what has been read as we progress through. In a complete calendar year, 52 weeks, we complete the Text. 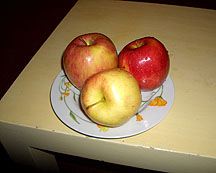 In March, I added a second class which meets over the phone lines as a telephone conference call class so I am now reading the same 12 pages of the A Course In Miracles Original Edition twice, every week. Many of the students in these classes are long time ACIM students who have read the FIP edition many times and studied with numerous other teachers.

We are always amazed, amused and sometimes even bewildered by what we read. Whatever one thinks about this edition, it has perked up interest in the Course for many long time students and new students have no trouble taking to it at all.

Recently we read this in the Original Edition. It is from Chapter 8, section "The Acceptance Of Reality." Read these two paragraphs:

"No mind can believe that its will is stronger than God's. If, then, a mind believes that its will is different from His, it can only decide either that there is no God or that God's Will is fearful. The former accounts for the atheist and the latter for the martyr. Martyrdom takes many forms, the category including all doctrines which hold that God demands sacrifices of any kind. Either basic type of insane decision will induce panic, because the atheist believes he is alone, and the martyr believes that God is crucifying him. Both really fear abandonment and retaliation, but the atheist is more reactive against abandonment and the martyr against retaliation." (ch.8.par.97)

"The atheist maintains that God has left him, but he does not care. He will, however, become very fearful and hence very angry if anyone suggests that God has not left him. The martyr, on the other hand, is more aware of guilt and, believing that punishment is inevitable, attempts to teach himself to like it. The truth is, very simply, that no one wants either abandonment or retaliation. Many people seek both, but it is still true that they do not want them. Can you ask the Holy Spirit for "gifts" such as these and actually expect to receive them? He cannot make you want something you do not want. When you ask the Universal Giver for what you do not want, you are asking for what cannot be given because it was never created. It was never created because it was never your will for you." (ch.8.par.98)

In the FIP edition this section, "The Acceptance Of Reality" is actually in Chapter 9. However, the two paragraphs above have been shortened to one paragraph. 261 words has been edited down to 160 words. 39% of the original material has been lost. One has to wonder "Why?" This removal qualifies for the "bewilderment" I mentioned above.

"No right mind can believe that its will is stronger than God's. If, then, a mind believes that its will is different from His, it can only decide either that there is no God or that God's Will is fearful. The former accounts for the atheist and the latter for the martyr, who believes that God demands sacrifices. Either of these insane decisions will induce panic, because the atheist believes he is alone, and the martyr believes that God is crucifying him. Yet no one really wants either abandonment or retaliation, even though many may seek both. Can you ask the Holy Spirit for "gifts" such as these, and actually expect to receive them? He cannot give you something you do not want. When you ask the Universal Giver for what you do not want, you are asking for what cannot be given because it was never created. It was never created, because it was never your will for ." (T-9.I.8)

I wouldn't mind this so much if the material that was removed was superfluous, but it is not. It is sometimes very significant. This line was removed from the Original Edition above:

"The martyr, on the other hand, is more aware of guilt and, believing that punishment is inevitable, attempts to teach himself to like it." (ch.8.par.98)

Considering the problems we have in our world with fundamentalist martyrs who kill themselves, and many others in the process, might this line possibly be important for us to read and contemplate? I'm not just thinking about Islamic fundamentalists, the "terrorists" who cause so much bloodshed in the Middle East, but even closer to home with the April 2007 deadly shootings at Virginia Tech with 33 people dead, killed by a young man who identified himself religiously as a martyr. Did this young man teach himself to like the inevitable punishment he believed was going to happen?

The Original Edition has many references to "soul." Most of these have been changed to "spirit" in the FIP edition but the two words have different meanings to me and I question the propriety of making these changes.

Freud is spoken about frequently in the Original Edition. Defenders of the FIP version may say that these were taken out because Helen Schucman and Bill Thetford were psychologists and these references were part of the personal material.

In the Original Edition we find this:

"The levels which man created by the separation cannot but conflict. This is because they are essentially meaningless to each other. -- Freud realized this perfectly and that is why he conceived the different levels in his view of the psyche as forever irreconcilable. They were conflict-prone by definition because they wanted different things and obeyed different principles." (ch.3.par.38-39)

The above reference to Freud seems in no way "personal." Neither does the following which appears in Chapter 4 in the section named "Love Without Conflict."

"The ego therefore experiences threat and not only censors but also reinterprets the data. However, as Freud correctly pointed out, what you have repressed can retain a very active life beyond your awareness. -- Repression thus operates to conceal not only the baser impulses but also the most lofty ones from awareness because both are threatening to the ego and, being concerned primarily with its own preservation in the face of threat, the ego perceives them as the same. The threat-value of the lofty is actually much greater to the ego because the pull of God Himself can hardly be equated with the pull of human appetites." (Ch.4.par.45-46)

Not only is this not "personal" it finally helped me truly understand a passage from the FIP version that I have struggled over for years. Oddly enough, in the FIP edition the passage I'm talking about does not appear in the section "Love Without Conflict" but in a later the section named "The Ego Body Illusion." Why was the order of the sentences and paragraphs rearranged so severely? The FIP editing makes the passage much less understandable to me. These sections appear to be so vastly re-written that it is hard to piece together where the individual text fragments even came from to begin with. We are not talking about simple editing, or merely the removal of some material. Is many places we are talking about things being completely re-written.

"A major source of the ego's off-balanced state is its lack of discrimination between the body and the Thoughts of God. Thoughts of God are unacceptable to the ego, because they clearly point to the nonexistence of the ego itself. The ego therefore either distorts them or refuses to accept them. It cannot, however, make them cease to be. It therefore tries to conceal not only "unacceptable" body impulses, but also the Thoughts of God, because both are threatening to it. Being concerned primarily with its own preservation in the face of threat, the ego perceives them as the same. By perceiving them as the same, the ego attempts to save itself from being swept away, as it would surely be in the presence of knowledge." (T-4.V.2)

I have struggled for years to make sense of "'unacceptable' body impulses" however I cannot find this in the Original Edition. It was something that we re-written into the FIP edition. A continuation of the Original Edition passage mentioned above has this in it:

"The upper level of the unconscious thus contains the Call of God as well as the call of the body. That is why the basic conflict between love and fear is unconscious; the ego cannot tolerate either and represses both by resorting to inhibition. Society depends on inhibiting the latter, but salvation depends on disinhibiting the former." (ch.4.par.47)

I find this fascinating and this is nowhere to be found in the old, standard FIP edition. Here we find a discussion about inhibitions, the concept of "dis-inhibiting" and the relevance of these ideas to society. Why was this removed?

In the beginning of this article I said that I have been "amused" by some of the differences. I was thinking of the following passage which exists in the Original Edition but is nowhere to be found in the FIP version. Being a person who studied college level math for years I found that this discussion about negative numbers put a smile on my face. Maybe it will do the same for you or possibly this is merely a very personal idiosyncrasy

"It is like negative numbers in that the concept can be used theoretically, but it has no application practically. It is true that if you put three apples on the table and then take them away, the three apples are not there. But it is not true that the table is now minus three apples. If there is nothing on the table, it does not matter what was there in terms of amount. The "nothing" is neither greater nor less because of what is absent." (ch.7.par.19)

It is only April and I am only on page 191 of the Original Edition but I can already tell that it is making a vast difference on my study of A Course In Miracles. It has given me new material to contemplate and fleshed out passages that seemed obtuse before. It has broken up rigid old Course definitions and caused me to approach the teaching much more abstractly and, possibly, creatively. The Original Edition is not precise when it uses the words "make" and "create." It is not precise on how it uses the words "extension" or "projection" and sometimes uses them interchangeably. Its attitudes toward the body and the world itself seem much more fluid and open to different interpretations. The discussions in the classes are mirly and students can no longer appeal to old authorities on Course definitions and meaning. The rigid Course definition "Gestapo" can't operate in this new era of the A Course In Miracles Original Edition. The book doesn't lend itself to it. Alas, some will possible miss being able to beat someone over the head with the book because they were not using the terms "correctly." I find the absence of these not too veiled attacks refreshing.

This article appeared in the May 24, 2006 (No. 19) issue of CMC Ezine. CMC Ezine is published by Community Miracles Center in San Francisco, CA. CMC is supported solely by people just like you who: become CMC Supporting Members, Give Donations and Purchase Books and Products through us.