A Psychiatrist's Thoughts on the 2016 Finale 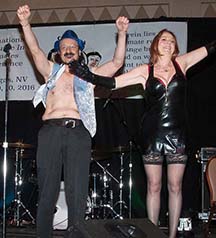 Rev. Tony Ponticello and Dr. Bob had a meeting in July 2017 and after talking about the Rev. Tony’s presentation at the 2016 ACIM Conference which Dr. Bob had not yet seen, Rev. Tony sent Dr. Bob a link to the YouTube video of the 2016 International, ACIM Conference Finale. After having watched the video, Dr. Bob sent the following email to Rev. Tony at the Community Miracles Center. It is reproduced here with permission.

Thanks for the link to your Las Vegas presentation. Finally, I had some quiet time to watch it. Frankly, given all the hype, I was expecting much worse. Or better.  (smiley face) I really enjoyed the way you slid into your incremental striptease. If I didn’t know where things were headed, it would’ve caught me totally by surprise. That was well done. And 30 push-ups! Wow. I couldn’t do that anymore. Not even close.

As for what you shared, there is such stigma about mental illness and the meds used to treat it that I am always delighted when someone steps bravely forward and ‘outs’ his or her bouts with it. So on that count, I applaud you.

There’s no way you could know, of course, but my psychotherapy training and my personal psychotherapy were based in the understanding and treatment of the emotion known as shame. The two painful, personal episodes you shared from your childhood about mammals and males with breasts are both good examples of shame in action. I have a nephew who for years refused to take off his tee-shirt at pools due to this same shame. My father admitted that he’d experienced this too.

The most egregious example I ever encountered came not as a psychiatrist, but as a med student during my surgical rotation. I scrubbed in on a case of gynecomastia (i.e. excessive male breast tissue) with a rather unethical surgeon who had promised this young man he would reduce his breast size. Yet everyone in the surgical suite paused and held a breath when the patient was wheeled in. He had two teeny little nubbins for breasts -- nothing resembling true gynecomastia. But his sternum and ribcage were shaped in such a way that it looked as though he had prominent breasts. Obviously, removing the nubbins was not going to do anything to help with that. But the surgeon proceeded to do exactly that. Then, to cap it off, the surgeon applied massive pressure dressings to each breast. So this poor kid was going to wake up in recovery with Double D-cups! And later on, he’d discover that the surgery had done nothing whatsoever to change his perceived large breasts.

But back to your presentation. An increasingly common psychiatric disorder is Body Dysmorphic Disorder (BDD), that is, the conviction that something is wrong with the appearance of one’s body: nose, penis, breasts, set of eyes or lips – you name it. Women are more prone than men due to cultural standards of beauty that are nearly impossible to live up to. BDD is a disorder of the shame family. Shame leads us to feel inferior, defective, inadequate, rejected – and we’ve all experienced it in one form or another. No one is immune. Even dogs and cats demonstrate shame behavior.

Interestingly, shame is rarely mentioned in ACIM, in marked contrast to guilt. I wrote about the reasons for this recently in MDC’s Holy Encounter and I’m attaching that article here. I hope you’ll find it to be a useful perspective. One of the things I learned in training and mentioned in the article is that the “cure” for shame is exposure: ideally gradual exposure and always in a safe setting: like alcoholics sharing their life stories in A.A. If we expose whatever was deemed shameful in an unsafe setting, it only gets reinforced.

So ... when I watched your talk/ performance, I saw you letting go of the past through exposure of what had once brought on shame in what you considered to be a safe setting. Not that most people would have seen it that way, in front a big crowd. But this was your conference, your baby, your show, with those who know and love you seated throughout the audience. And this did take place in Las Vegas, after all – the queen of shameless towns, as you noted, with strippers doing their thing only a short distance away. The result? The shame that is inherent in bodies got exposed for what it is and reversed when you displayed it so brazenly, but in the context of a helpful talk on transcending bodies and division. Sure, it provoked shame in some audience members. But overall, mission accomplished.

I’ll only add one more thing, on the topic of division. It is indeed everywhere these days, as you noted, especially in the political arena. One of the more surprising places (to me) where division lives on is the division within our own Course community, rooted in which version of ACIM is the purest, the most genuine, the most correct – in a word, the best. You and I are in a position to either widen that divide or help heal it. My intention is to heal it as much as possible. I have no doubt that’s why I was so strongly guided to write my review of the Circle of Atonement’s new annotated ACIM. You joined me in that healing mission by featuring my review in your newsletter, making it available to many more students than would ever have seen it on Amazon. For that I am grateful. I only hope that you and I can continue to walk this path together and bring more healing to our community, each in our own way. (You won’t catch me taking off my clothes on stage however. In that respect, you are a tough act to follow.)

Lovingly, and in the light of Christ’s vision - Dr. Bob/ Robert ♥ 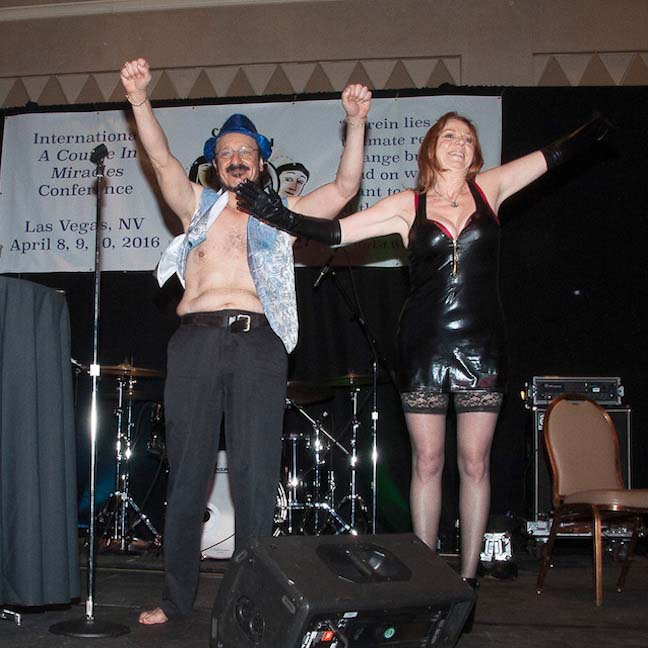 This article appeared in the August 2017 (Vol. 31 No.6) issue of Miracles Monthly. Miracles Monthly is published by Community Miracles Center in San Francisco, CA. CMC is supported solely by people just like you who: become CMC Supporting Members, Give Donations and Purchase Books and Products through us.