Who's Afraid of a Big Bad Bear 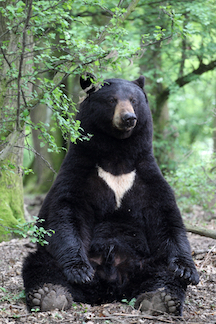 I live in "black bear country" of western Pennsylvania on 144 acres of woods not too far from a thriving Amish community. My nearest neighbor lives several hundred yards away. Since I love to interact with the wild birds of the area, I put up a bird-feeder, which hangs about ten feet from my kitchen window and also five feet from my front porch. I tell you this because one of the other fringe benefits of this is that some black bears regularly visit the bird-feeder and my front porch.

"My" bears love to eat black oil sun-flower seeds; and they also love to rearrange my porch furniture. They do that on most visits to the bird-feeder, which I mention again, is only a few feet from my front porch door. In the last three years, the bears have knocked down the feeder more than a dozen times and stole the metal cage feeder twice. It was several months later, when the leaves had fallen from the trees that I discovered one of the missing feeders hiding about 80 yards from the house in the woods. The other feeder is still A.W.O.L.

During the time that the feeders were "stolen," I would sometimes sadly imagine a frustrated bear with his/her head stuck inside the metal cage feeder, like Don Quixote jousting with gas wells in the woods which are "kinda" like windmills. Sometimes my imagination would do role reversals with the story of Goldilocks and the Three Bears, but in my story the three bears come to my house and eat all the porridge bird seeds and then wreck my porch furniture (or at least move it around a bit).

One evening, just two weeks prior to my signing up to take the A Course in Miracles Ministerial Program from the Community Miracles Center, I cooked up a huge beef bone for my 80 pound, part pit-bull, muscle dog, Sunshine-Adventure. Sometimes I forget and call her Forgiveness, which is the name of my previous shepard collie dog who died a few months before I got Sunshine-Adventure from the same rescue center. Unbeknownst to me at the time, this new dog was brought into the shelter on the same day that my old dog had died. What a coincidence since we know not to argue about reincarnation.

To continue my aside about my previous dog, I had named her Forgiveness because my study of A Course In Miracles had shown me that it was the most important thing to learn in order for me to be happy. By naming my dog Forgiveness, I kept the concept right in front of my face for most of my day with her. As another aside, my 85-year old mother, Rosalie, who I was taking care of in my home at that time, argued strenuously that "Forgiveness" was definitely not a dog's name and so, she said, I could not name the new dog Forgiveness. In my usual highly logical manner, I explained to my mother that since I had already named the dog, "Forgiveness," it obviously truly was a dog's name. To top it off, I told my mother, "Watch this." I then called out, "Forgiveness." The dog ran joyfully to me thus proving that it was obviously the dog's name and that she knew it. For the next two weeks, my mother was "loudly silent" about the dog's name.

Eventually she grew to love the very affectionate dog. She started to call her "Forgiveness" just like the rest of the family and friends were doing. And so, it turned out to be a dog's name after all. Now when I read ACIM, I realize that the book was written about my dog and it's a great tribute to her. Forgiveness really is the key to happiness!

Now, back to my adventure with a 400 pound black bear, and my present dog Sunshine-Adventure. Though wasn't it nice to also hear about my loving mother who "passed away"/transitioned at 90 and a half in January, 2008, after outliving four husbands? I sneaked Forgiveness into the emergency room after the nurse told me that my mother had "passed." That loving dog ran over to my mother's still body and licked her arm and then we left after a prayer on my part. (Thanks for listening.)

Now, again, back to the bear story – you people get so easily distracted. Try again to pay attention. This is the same way that we tend to do the daily lessons in the Course (lots of distractions). I had given Sunshine-Adventure that huge beef bone that I told you about. She was eagerly devouring it in the front yard near the porch. As was my usual custom, I left the door ajar so that she could push the door open if she wanted to come back inside. I know; I know. Bears could also push the door open and come inside too. My two sons, Seth and Justin, keep telling me that also. But, I'm so spiritual that only very friendly house-trained bears would ever come in. While my sons do warn me about the dangers of my open-door policy, they certainly have not suggested that I build a high wall around my property to keep out illegal immigrant bears. Besides, who would pay for the wall? Certainly not the bears – and certainly not the Mexican government.

From what I learned in the Course, if I defend myself by closing my door tightly. I am attacking the bears. So I faithfully remain defenseless. "In my defenselessness my safety lies." (OrEd.WkBk.153)

Okay. Stop interrupting my story. While the dog chewed on that most delicious bone (I'm guessing, since I'm a vegetarian and sometimes vegan), I started watching a fascinating, two-hour long, History Channel film about ancient religions. Periodically, maybe every 20-30 minutes, (see how I started this sentence with a "big" word to impress you, but you were not impressed), I would get up from my potato couch and walk to my front door to check on the dog out in the front yard. (By the way, I also mentioned that "ancient religions" film to impress you. I guess that didn't work either. You're a tough audience). Okay, onward! Everything was fine for the first couple of dog checks. But this time, when I peered out the glass top of the door, I was looking at maybe a 400-pound black bear running full-tilt out of the woods into my front yard.

I could not see my dog. I thought that perhaps the bear had already killed her in the woods before I came to the door, or the bear was running towards her to attack her on the other side of the porch banister which was blocking my view of where she could be lying with the bone.

Without fear, I immediately ran out the door to save my dog!!! I was running towards a big black bear who was now running towards me. I started waving my hands over my head to look bigger (I read that technique somewhere), and yelling, "No! No! No!" at the top of my lungs!!! When the bear and I were about ten feet apart, the bear executed an amazingly beautiful, lightening-fast, u-turn and ran back into the woods the way it had come.

For the next several minutes, I called and searched prayerfully for my missing dog. Was I too late to save her? Then, I prayed that perhaps Sunshine-Adventure miraculously had pushed the door open and came inside before the bear ran towards the house. If she had done that, it was unusual that she had not come over to me on the couch, to greet me after her long stay outside with the bone. But, she could have gone into her dog bed in my back bedroom without telling me. Hopefully, that was the case this time. I prayed that she was still alive and well. I went back to the house and pushed open the front door and there she was – safe and sound! Probably wondering why I woke her up with all my yelling outside for her. Well, I guess that I am entitled to Miracles after all.

Then, it hit me. I realized that I had confronted a charging 400 pound black bear while thinking that I was saving, what turned out to be, my imaginary dog who certainly did not need to be saved since she was already safely inside. I surely was only affected by my thoughts. Then, I started to have fear about what I had done. My body started to shake for several minutes. I am and was extremely grateful that the bear humored me and/or had realized "how spiritual I am." Also, I am thankful and grateful that I am not the victim of the world that I see.

Hey! Wouldn't it be interesting if my whole story had been written in iambic pentameter ? Check it out and see.

P.S. I love you all. Next time, try to stay more focused when you read a story. Try not to get so easily distracted.
P.P.S. Remember, you are love. ♥ 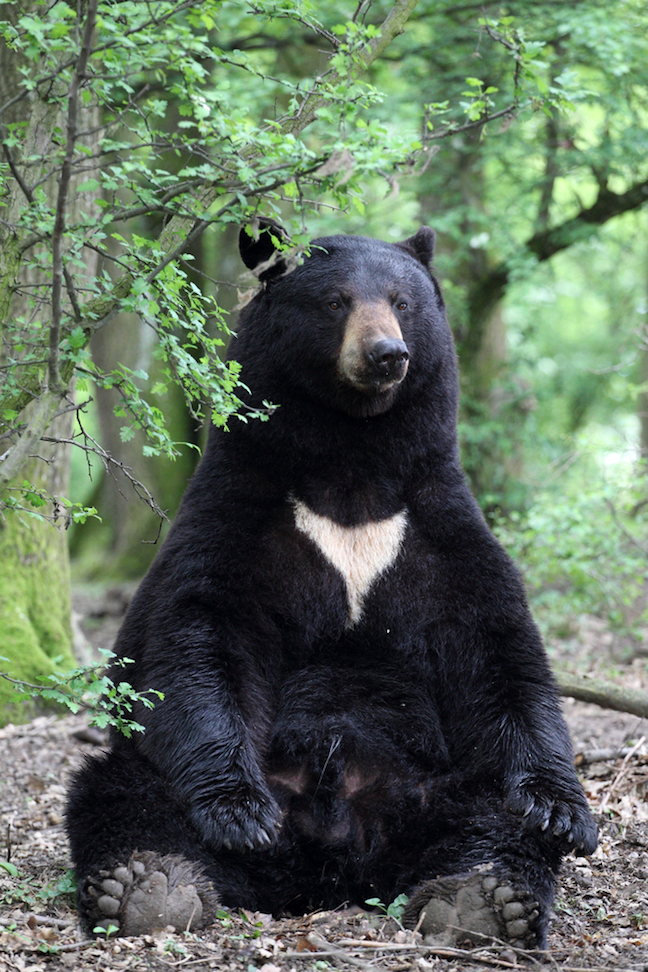 This article appeared in the March 2017 (Vol. 31 No. 1) issue of Miracles Monthly. Miracles Monthly is published by Community Miracles Center in San Francisco, CA. CMC is supported solely by people just like you who: become CMC Supporting Members, Give Donations and Purchase Books and Products through us.